Welcome to another edition of Channel Chaser! Well, it’s that time of year again: time to speculate on what could be coming next on that wackiest of sci-fi shows, the long-running British series Doctor Who. The creators of the show recently put out a trailer for the new series to start in September, and oh my, is it exciting.

First and foremost, I’m going to skip right to the part that everyone’s talking about: the identity of Maisie Williams. She pops up at the very end of the trailer, where she questions the Doctor, “What took you so long, old man?” To which the Doctor replies, “You!” as if he knows who she is. There’s many, many theories flying around about the identity of the Game of Thrones star, from a younger incarnation of River Song to the Master, or another Time Lord from the old series like the Rani or Romana, or even the Doctor’s long-lost daughter Susan.

Personally though, I’m really pulling for Williams to be a post-regeneration version of Jenny, the young female clone from David Tennant’s episode “The Doctor’s Daughter.” The end of that episode established that despite appearing mostly human, Jenny had indeed picked up a Time Lord’s power to return from death, and while she didn’t actually change her face, who’s to say it couldn’t happen? Also, I’m not really seeing anyone else, especially River or the Master, call the Doctor “old man” in such a flip way. Jenny was an awesome character who I’ve been waiting to see again for a while, and as such I think her whole story has been criminally neglected thus far. Her fun and feisty spunk might even inject some much-needed light-heartedness into the series. 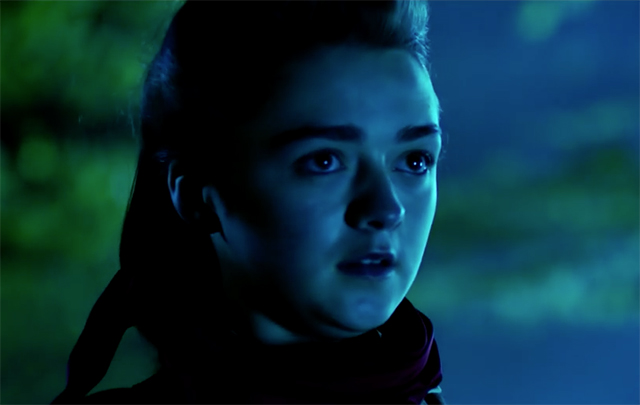 Speaking of which, a few other shots from this trailer seem to indicate things may be headed in that direction anyway. First of all, Peter Capaldi has visually changed, wearing less severe clothing and noticeably longer and wilder hair than we’re used to. It’s almost a throwback to a more Tom Baker/Jon Pertwee look for the Doctor, and it hints at a character who’s maybe a bit more keen on taking risks or having adventures than Capaldi’s so far stuffy, no-fun Doctor has been.

SIDEBAR: I apologize for my criticism of Peter Capaldi. Please understand it is in no way a reflection on the fine job he’s done as the Doctor so far. It’s just that the now-departed Matt Smith will always and forever be my Doctor, and his departure hurt in a very big way. Add to that the fact that Capaldi’s Doctor is pretty much the antithesis of everything Matt Smith was, and this has been a difficult transition to say the least. END OF SIDEBAR. 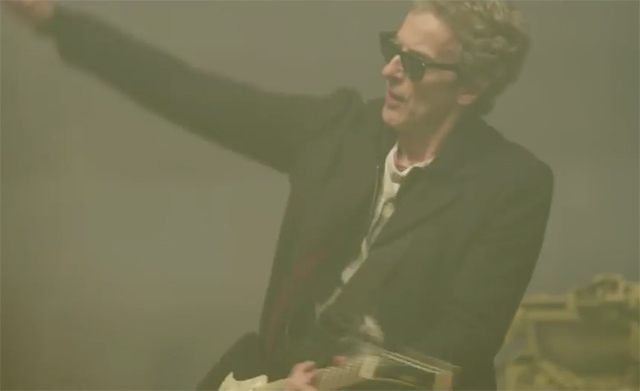 Anyway, about the Doctor’s Marty McFly moment where he’s rocking the sunglasses and jamming on the guitar…bizarre, yet incredibly awesome. If Capaldi’s first season as the Doctor was all about the character finding himself again after some post-regeneration angst, I’m very much looking forward to him loosening up and letting his inner quirks out more this season. We could all definitely use more moments like that.

From the looks of things, it actually appears Clara could be the one going to some dark places this season. Remember, she’s just coming off of losing Danny Pink, the love of her life, at the end of last season, so she’s probably still pretty devastated. Most of her shots show her looking pretty freaked out, and in places with creepy lighting to boot. And now she’s hanging out with the Master…what’s with that? Although the one shot of her and the Doctor hugging is sort of heartwarming. Maybe we’ll see their relationship thaw a bit as well this year. But it’s also true that Clara at this point is a super long-running companion, which more than likely makes this season her last. Will she get a sweet farewell, or a tragic departure like so many others before?

Yet another indicator of a tone shift this season is the near-end line from Peter Capaldi, as he shouts defiantly: “I am the Doctor, and I save people!” This sort of indicates that maybe Twelve has gotten over his aloof, hands-off attitude that dominated last season, and that maybe he’s going to be a bit more traditional hero and willing to get his hands dirty this year. As I said before, I can’t wait to see this Doctor come out of his shell and just be amazing.

-Well, we’ve got some of the usual suspects in terms of villains, including Daleks and Zygons…and that’s pretty much it. Huh. Most tellingly, no Cybermen. Although I’m sort of okay with that given how the Cyberiad’s been butchered recently by mediocre episodes like “Dark Water” and “Death in Heaven”. Sorry, boys. But it looks like there’s a whole bunch of new monsters, including walking trashcans, zombie Abraham Lincoln and others, and a shadowy thing with glowing eyes. Creepy.

-Zombie hands sticking up out of the ground…great. Didn’t we just do this in last season’s finale?

-Super delayed reaction: holy crap, the Master…I mean, the Mistress…is back! So how did she survive getting apparently blasted into atoms by the Cybermen last season? I guess we’ll find out, and I’m looking forward to it. Michelle Gomez was a delightful villain, and we need more of her on this show. Also, she and the Doctor seem to be getting weirdly tight this series, especially given the Doctor’s opening monologue about loving/hating something sounds suspiciously like it’s directed at her. A season-long struggle between these two titans would be seriously cool.

-In other returning character news, apparently UNIT techie Osgood will be back this season as well! Seems to be a bit at odds with how she was killed by Missy last season, though, but since the Zygons are apparently back this season and given their role in the “Day of the Doctor” story, my guess is that it’s not actually Osgood who’s returning, but the Zygon infiltrator posing as her. We’ll just have to wait and see.