With last Sunday’s race, Formula One wraps up its 2013 season with a fourth consecutive title for Red Bull Racing and Sebastian Vettel.  The year was an interesting mix of unpredictability and inevitability, as the winning team and driver marched their way to victory through a mire of tire-related mayhem.  With massive changes to regulations and team lineups on the horizon, I though I’d make four predictions for 2014, one for each consecutive Red Bull championship.

1: Fernando Alonso and Kimi Raikkonen will run each other off the track at least once.

Putting to top-level drivers in the same F1 team has usually taken each of them off the other’s Christmas card list by the end of the season.  Prost and Senna at McLaren.  Hamilton and Alonso, also at McLaren.  Webber and Vettel at Red Bull.  The point is, world champions do not work and play well with others, at least when “others” means “equally fast drivers.”  Alonso is already clearly unhappy with Ferrari’s inability to provide him with a decent car, so bringing in Raikkonen can’t have improved is mood.  Raikkonen has little tolerance for intra-team politics, yet is headed into a team famous for exactly that.  At some point in 2014, someone’s engineer will ask him to let the other guy through, and the response will go viral faster than any of Raikkonen’s radio transmissions from the 2012 Abu Dhabi Grand Prix. 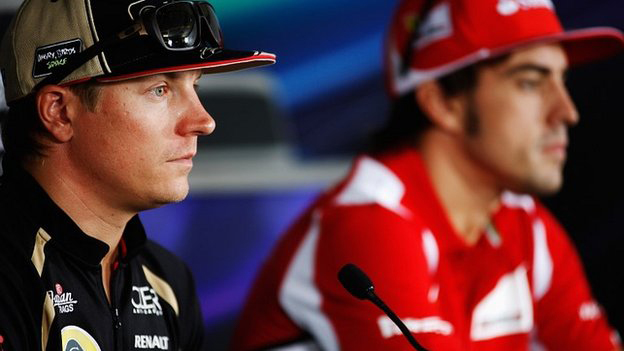 “Yeah, yeah yeah, I’m blocking Fernando all the time. You don’t have to remind me every second.”

2: Felipe Massa will excel at Williams and no one will notice.

While his racing form has been inconsistent over the last few years, Massa’s performance is actually somewhat predictable.  Put him under pressure and he makes mistakes, take it away and he starts driving well again.  Stepping into a midfield team without any championship ambitions will take an enormous amount of weight off his shoulders, and we all know that less weight means more speed in a race car.  The Williams team will prove to be a good environment for Massa, but his inevitable displays of talent will go unnoticed by the press at large as he spends the season running with the midfield.  Small teams mean less pressure, but they also mean less attention.  Look for Massa to do well, and listen for the commentators to say nothing about it.

3. Either Caterham or Marussia will score their first championship point.

New engines and new rules mean one thing for next season: unreliable cars.  As the teams struggle to understand their new equipment, look for an increased number of engines and other parts going, as Steve Matchett would say, “kablammo.”  With the leaders and midfield teams pulling off track in a cloud of smoke more often, the perennial backmarkers of F1 will have their best chance ever to pick up that elusive first point.  My money’s on Marussia’s Max Chilton, who was 19 for 19 in finishing races this season.

I prefer “kablooie” myself, but who am I to contradict the experts?

4: Nico Hulkenberg will leave the sport to drive in IndyCar.

The tall and talented gentleman from Germany has had a tough time in F1, and has never really had a car in which to display his true skill.  With virtually every team in dire financial straits, he’s had difficulty finding a good race seat without the absurd amounts of sponsorship money that certain unnamed drivers can bring to the table.  Things will only get worse next year, as many analysts are predicting that a poorly calculated minimum car weight will make life incredibly difficult for taller (and therefore heavier) drivers.  Enter IndyCar, where a resurgence of popularity has made sponsors easier to find and the stock Dallara chassis seems to fit drivers of a wide variety of heights.  A driver of Hulkenberg’s talent can only be given the short end of the stick so many times before he decides to try his luck elsewhere, and F1 seems to be making it very easy for IndyCar to lure him away at the end of 2014.