It’s that time of year again, when every public place is decorated top to bottom in fake spider web, rubber skeletons and quickly rotting jack-o-lanterns, all with “The Monster Mash,” “Ghostbusters” and the entire soundtrack from The Rocky Horror Picture Show blasting out of a boom box on repeat. As dedicated gamers, isn’t it about time we broke the mundane Halloween traditions and introduce our music to the world? Video games have some incredibly creepy music that’s perfect for Halloween, which is why I compiled an “unlucky 13” video game tracks you need to have blasting from your doorstep this All Hallows’ Eve. 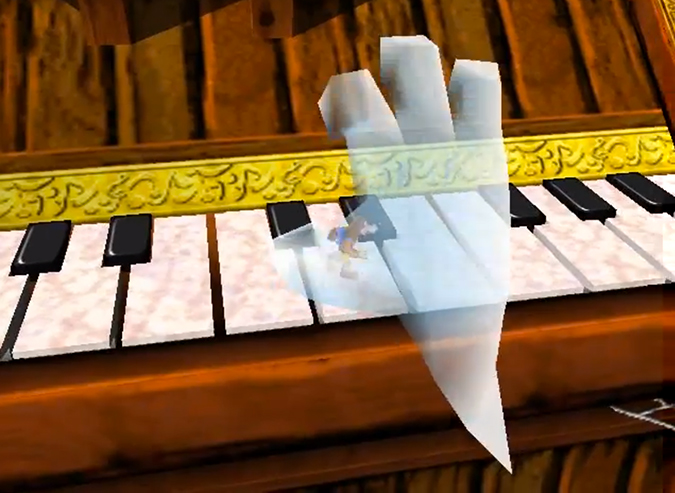 NOTE: Don’t expect 5 Mario and Zelda tracks on this list. I’m only choosing one song per franchise, and if a series has multiple good tracks, I’ll make sure to list them as “honorable mentions.” So with that, here we go, in no particular order:

It starts with an ominous tone, and quickly escalates to kick-ass status as it pumps you up for your vampire-killing journey. While the Castlevania series is chock-full of spectacular Halloween songs (with the original game’s “Vampire Killer” also of note), “Bloody Tears” is easily my top pick from the franchise, if anything for its ability to be both eerie and heart-pumpingly fast-paced. And speaking of fast…

Yes I know, it’s cheesy with its wanna-be rapper trying to make Knuckles the Echidna look all ghetto as he searches for Master Emerald shards. But that’s what makes the theme song of Sonic Adventure 2’s Pumpkin Hill level so good. This corny rap about getting scared by ghosts gets stuck in your head so easily it’s essentially the “Spooky Scary Skeletons” of your video game Halloween playlist. If you want some more spooky Sonic music, check out the themes for the Hang Castle and Mystic Mansion levels of Sonic Heroes. But let’s be real, those tracks pale in comparison to this gem. Heh. GEM. As in the MASTER EMERALD. Get it?  No? Oh… Moving on.

While BioShock has an overall incredible soundtrack by Garry Schyman, this piece from the game is easily my favorite. “Written” by deranged artist Sander Cohen, this track is both haunting and beautiful, serving as a musical illustration of the intricate and delicate mind of an aristocrat gone mad.

Much like “Bloody Tears” in Castlevania II, the theme of the Hospital chapter in Super Meat Boy (itself a Castlevania-inspired level) hints of impending doom, using a fast beat to keep you moving and on your toes. If you’re blasting this on Halloween, make sure you keep an eye out for any sentient blood clots and used hypodermic needles on your trick-or-treat route.

Halloween isn’t just about classic scares from monsters. It’s also just as much about the horrors of science fiction. And in sci-fi, what is scarier than an army of evil robots running after you with phasers set to KILL? This theme from Team Fortress 2’s “Mann Vs. Machine” mode hearkens back to those days of classic sci-fi, with plenty of scary industrial sounds and a wailing disembodied voice.

Ahh, the song that haunts the nightmares of every Gen-1 Pokémon fan. As a new generation of young gamers now enjoys X & Y, why don’t we play this song as we tell them about the time we older Pokémon Trainers encountered the ghost of a dead Marowak?

Whether you’re playing Ghouls ‘n Ghosts or Ghosts ‘n Goblins, whether it’s the arcade version, the NES version, or heck, even if you’re playing Marvel Vs. Capcom 3, this is one kick-ass classic game theme for the ‘Ween. That’s short for Halloween, by the way. Not “wiener.” I’m far too mature to make a crude joke about Arthur in his underwear. Or am I?

Just listen to that eerie toy piano plunking out the notes at the beginning of this song and try telling me why this doesn’t belong in your Halloween video game playlist. This Smash Bros. rendition of the theme from Luigi’s Mansion takes the just-as-perfect-for-Halloween theme from the original game and cranks up the creepy. Now while this may be a theme originally from a Super Mario game, this version is from the Super Smash Bros. franchise. So now that we’re clear that I’m not breaking my one game per franchise rule…

Now, the Mario franchise keep cranking out spectacular haunted house themes, from the Ghost Houses in Super Mario World to the Ghostly Galaxy in Super Mario Galaxy. But the theme from Big Boo’s Haunt strikes a different chord with me. Unlike the other “ghost themes” in Mario games, this one is dark. And it’s appropriate enough when you consider it’s in this level that you experience the most frightening event in the entire Mario franchise…

10. “Shadow Temple” – The Legend of Zelda: Ocarina of Time

While we’re on the subject of the Nintendo 64, let’s talk about Zelda. If there’s any track from the Zelda franchise that needs to play on loop in a haunted house, it’s the Shadow Temple theme from Ocarina of Time. The dungeon itself is a haunted house, with hidden passageways, giant disembodied hands that fall from the ceiling and grab you, and a giant bongo-playing ghost as the boss. This music fills your ears with the mystery and uncertainty of what lies around each corner of the Shadow Temple.

You walk behind a broken panel deep in the bowels of Aperture Science to find a hidden encampment made by former employee Doug Rattman. It’s been abandoned for decades, yet you still feel his presence. Starting faint then rising up to almost overpower the music, you hear remnants of Rattman’s schizophrenic ramblings back from when he, like you, was alone in an evil science facility with nothing but his own thoughts keeping him company. Scary as hell, indeed.

12. “Sacrificial” – The Binding of Isaac

You’re in the basement of your house, running away from your mother, who is trying to sacrifice you to God (read: murder you with a huge kitchen knife). You’re naked and alone, with creepy and dangerous monsters at every turn. This theme for the first level sets the mood for a game that is perfect to play on Halloween. The music even changes tone as you progress through The Binding of Isaac, getting increasingly ominous (and later more desperate sounding) as you fight through Mom’s labyrinth to save your skin.

I know we’ve made it to the end, but honestly, you can get rid of all the other songs I listed here because Banjo-Kazooie has your entire Halloween soundtrack taken care of in one level. Need a general spooky-kooky Halloween theme? See the video above. Are you lurking through a rickety old house at midnight? Play this. Do you find yourself in an ancient, unkempt cemetery? There’s a version of the Mad Monster Mansion theme for that too. And while we’re at it, let’s throw in another track from Banjo-Kazooie, just in case you find yourself in a witch’s lair. And look, there’s a spooky rendition of that too! Two themes that can change tones completely with some slight shifts in tempo and use of instruments means you really only need these few pieces from the Banjo-Kazooie soundtrack and your Halloween playlist is covered.