You’ve done it. After hours of pondering, inspiration has finally struck like lightning. You’ve come up with the ideal series or movie with which to introduce your reluctant friend to the wonderful world of anime. There’s just one tiny little problem: you still have to convince the lad or lass in question to sit down and watch it. It’s time to sell your hobby like it’s a parking lot full of used cars. 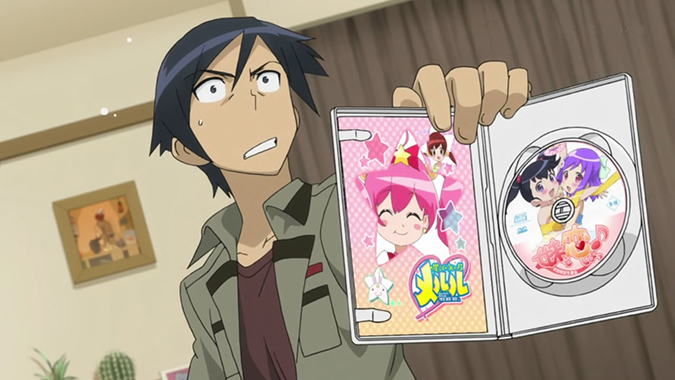 You want me to watch WHAT!?

First of all, picking the right moment is key. To use a first-person shooter analogy, think of yourself as a sniper instead of a heavy gunner. Rather than unleashing a barrage of recommendations as soon as you see your friend, it’s best to hang back and wait for the ideal opportunity. Some conversation topics let you naturally bring up the idea of watching the movie or series that you’ve picked out.

One of the best times to make your pitch is when your friend is talking about a movie or TV show that he or she enjoys. Find a connection between their favorite thing and bring up how it reminds you of the anime you have in mind. Talk about an especially memorable scene, a compelling character, or whatever you think makes your choice sound like it’s worth watching. If your friend sees a connection with something he or she already enjoys, this one recommendation will be far more effective than a constant barrage of “OMG YOU MUST WATCH KILL LA KILL RIGHT NOW.”

A common mistake is to wave the anime banner immediately and passionately in these situations. Rather than announcing your noble intention to get your friend hooked on anime, it’s best to limit the sales pitch to a single movie or series. People are understandably wary of taking on a new, time-consuming hobby, but they’re happy to watch a cool movie with a friend. Send an ambassador, not an army.

On the off chance that your friend isn’t swayed by your recommendation, be prepared to back off and try again some other time. Anime is awesome, but it’s not worth annoying someone your care about just to bring in a new fan. A little persistence can turn the tide in your favor, but make sure you don’t end up sounding like the annoying guy at every anime convention who never shuts up about his favorite harem comedy.

Finally, trust your instincts and be confident. You know anime, and you know your friend. You’ve already picked out a show that’s sure to be a hit. In all likelihood, there’s not a whole lot of convincing to be done. As long as you can make it seem like a fun thing to do, your friend should be naturally inclined to say yes. After all, the reason you’re friends is because they enjoy hanging out with you in the first place.

Once you’ve made a successful recommendation, it’s time to move on the final step, and the last part in this series: turning an enjoyable experience into a hobby.

You can read Part 1 here and Part 3 here.