I’m sure right now you are one of the thousands watching Awesome Games Done Quick, an annual charity gaming marathon that involves a solid week of speedrunners blasting through your favorite games. I made sure to tune in on Twitch shortly after this year’s event started on Sunday, mostly because one of the first speedruns featured in this year’s stream was of a childhood favorite game, Banjo-Kazooie.

I got hyped from the start, shouting out in excitement whenever a speedrunner succeeded in pulling off a challenging glitch or exploit, and as a result I stayed hooked on the stream for the two-hour-and-fifteen-minute run of Banjo-Kazooie. 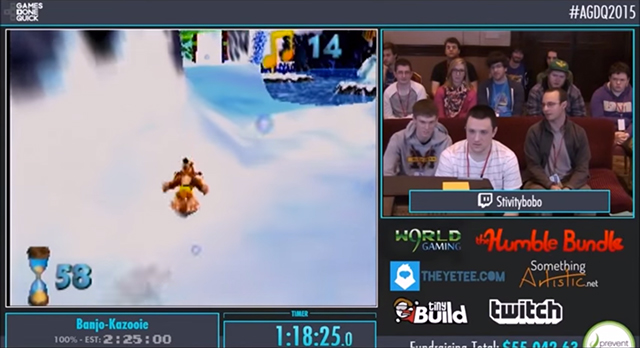 But I didn’t stay purely because I was impressed by the skill of the person playing. He was impressive, yes, but I would not have known what to be impressed with if it weren’t for another talent sitting right next to the player on the couch: the commentator.

During Awesome Games Done Quick, commentators – and sometimes even the speedrunners themselves – talk through every aspect of the game being played, highlighting each glitch they are about to exploit, explaining how and why the game thinks in such a way to make this glitch happen. The result: not only do I learn some impressive secrets about some of my favorite video games, but I also learn how challenging it is to pull some of these exploits off, and therefore I get a satisfying feeling when a speedrunner pulls off a glitch that shaves a few second off their runs.

Some of the most talented commentating I saw, however, came when the commentator knows what trick the player will pull next, and when it is coming, but doesn’t tell the audience exactly what is going to happen until the magic is made. A perfect example: during Sunday’s Banjo-Kazooie run, the player executed a new glitch in the “Grunty’s Furnace Fun” level. The commentator explained the player was taking a different path through Gruntilda’s sinister board game than in previous years, but didn’t say exactly why. When the speedrunner then used this new exploit to skip the rest of the level, the crowd – and I, sitting in my apartment – went absolutely wild.

There is no doubt that e-sports have been on the rise in the past few years, and that is largely due to Twitch’s massive online presence overall. But commentating everything from speedruns to Super Smash Bros. tournaments is, I would argue, one thing that keeps people coming back for more. In many ways, e-sport commentating is just like adding commentary to any other sport, like a soccer or football game. It not only informs the viewer, it entertains as well when the commentator knows the game and the strategy as well as the people playing.

Whenever I watch something on Twitch, I remember the first condescending line of a BBC News story on the streaming service: “Who would want to watch teenagers, clicking away at their video games all night?” In a way, the reporter has a point: watching other people play video games can be boring when you don’t have the controller in your hands. But when someone is there, talking you through the skills the players have and the strategies they are using, watching games becomes far more exciting. To those gamers who step up to the microphone and turn every Twitch session into a high-energy gaming event, from the casual players streaming from their bedrooms to the pros bringing an extra layer of entertainment to the biggest tournaments of the year, keep doing what you’re doing. It may not seem like much, but you, the commentator, are making strides toward gaming earning more respect as a mainstream medium.