Welcome to another edition of Channel Chaser! Well, I finally swallowed my pride and completed my long-overdue viewing of Netflix’s fourth season of the former TV sitcom Arrested Development. I was such a huge fan of the show during its run, and then was so disappointed by its lackluster return online, that for a long time I refused to have anything to do with the show that broke my heart. But now that I’ve seen it in its entirely, I decided that it was high time to give Arrested Development the full-length review it deserves. 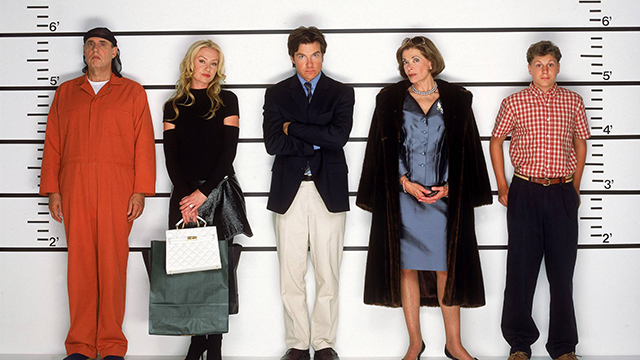 The story of Arrested Development focuses on the wealthy Bluth family, an incredibly dysfunctional group that falls on hard times after their patriarch, George Bluth Sr., is arrested and investigated for widespread fraud in his real estate company along with some “light treason”. But rather than let his selfish, self-absorbed family break apart, George’s long-suffering son Michael decides to do his best to keep them together for the sake of his own son, while dealing with all the craziness and scheming that results from being part of a family built on double-dealing and lies.

The style of the series is one of the more notable things about it, as it is shot by handheld cameras in a similar manner to mockumentary sitcoms like The Office, except for the fact that in Arrested Development, the characters are not actually aware of them. Furthermore, the series has its own narrator (coincidentally the show’s creator and runner, Ron Howard), who provides commentary and clarification on situations that arise between the Bluths, complete with historical footage and photographs. But what really distinguishes the narrator is that despite being just a voice, he is almost a character in himself, often taking it upon himself to directly contradict statements made by the other people on the show for comic effect. It really adds a lot to the humor of the show, and opens up a very interesting meta angle that isn’t actually explored until the fourth season…although it would probably have been better if it hadn’t.

Arrested Development is a true ensemble show, with a central character, Michael Bluth, surrounded by his troubled, devious, or just deluded family members. While Michael is intended to be the straight man of the series and the most upstanding and moral family member, the show makes it clear that he is also a human being, and prone to many of the same flaws that his fellow characters fall prey to: selfishness, pettiness, vanity, and self-righteousness. Even still, the show tries to redeem Michael at least in part by showing that, more than anything, he cares about his son, George Michael. I have to say, Michael Cerra perfectly nails the role of the awkward, sheltered son who is a good kid but just gets dragged into so many other people’s problems, it’s hysterical.

I could spend ages talking about the entire cast of this show, mostly because it’s so big and they are pretty much all standout performances across the board. The intricacies of each character’s relationships with all the others are always continuing to be broadened upon and explored in ways that are usually terrible yet funny, but that on occasion veer into genuine sentimentality and understanding. I’d like to single out Will Arnett and Tony Hale as my personal favorites for their performances was Michael’s polar-opposite brothers. Arnett is Gob (George Oscar Bluth, pronounced by only him as “Job”), a narcissistic and superficial ladies’ man with a knack for messing up magic tricks. Hale plays Buster, an emasculated and timid man-child completely under the thumb of their domineering and manipulative mother. While they each have a complicated relationship with Michael and are both completely neglected by their family for different reasons, Gob and Buster probably have the most interesting scenes together of any other character, not to mention that their humanity is much clearer than many of the other Bluths: for Gob, his weakness is that he is very lonely and really doesn’t have any friends; and for Buster, you always feel good rooting for him to step out from his mother’s shadow and stand up to his belittling and oppressive family. Plus, the hook joke just never gets old. 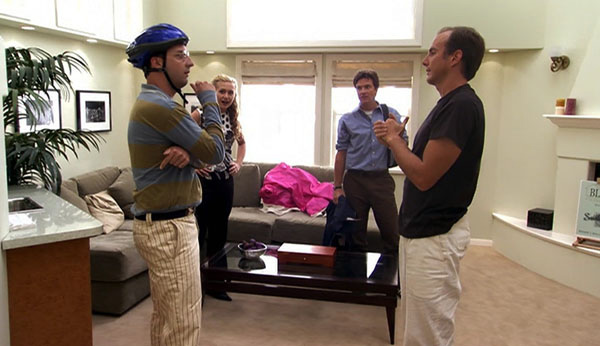 I also love how the show is meta in its humor, in that it features many running gags (such as Tobias’s questionable turns of phrase and Gob’s awful magic tricks, among others), as well as flashback-rewind-self-referential jokes that make it so you wouldn’t just be able to jump into the middle of the series and expect to know what was going on. The plot also unwinds rather slowly and behind the scenes, but it is there, and the involvement of Afghanistan, the Japanese, and the collapse of the housing market add a touch of needed worldly awareness and realism to this insular and often ridiculous family drama.

The unfortunate truth, however, is that Arrested Development, like many other shows that are ahead of their time, was just too good to last. Unappreciated on its network, it was cancelled after just three seasons. And when it was picked up again on Netflix, it was done exactly the way you wouldn’t want it to be handled. Rather than going with its strengths in ensemble casting and family strife, the renewed series decided to be more creative and focus on the adventures of each of the individual Bluths, using frustratingly non-linear storytelling, with very few episodes ever featuring two characters exchanging dialogue. I’m sorry, but the new experimental style just doesn’t do it for me. All the humor that came from the characters’ interactions is gone, and we’re forced to confront the fact that these people are just completely and utterly terrible. Before, at least they could all be terrible together. I’m sorry to say that this is too real, and it’s just not funny anymore.

I also didn’t like how the show expanded on its meta-ness to dangerous levels by introducing Ron Howard, the actual narrator and creator of the show, as his own character as Michael tries to get the rights to make a TV show about the actual TV show we’ve been watching for three seasons. I’ve stressed how overuse of this kind of thing can have mixed results before (see my thoughts on House of Cards), and this time it’s the same deal. It doesn’t add anything to the story, but instead detracts and distracts from it in some ways. Not a great way to go on a season that was already lackluster and confusing enough.

I’m obviously not including the fourth season in my final judgment: you should probably only watch that if you’re really, really into it. But other than the somewhat failed revival, Arrested Development is a hilariously unconventional sitcom with just enough undertones of family unity and hope for individual character development to counterbalance the essential flaws of the Bluth family. You secretly know they’re never really going to change, but you always find yourself hoping that they will, and the little moments of triumph for each of the characters, however fleeting, are well worth the wait.