A couple of weeks ago, 2K United Kingdom tweeted an image that was teasing something related to the BioShock series:

Oooo, what COULD this mean?! pic.twitter.com/P93Nl643SU

Oh boy, did I get excited. What could it be? Is the original BioShock, one of the most critically acclaimed first-person shooters of the last generation, getting the remake treatment? Will I get to see the glorious Art Deco structures of the City of Rapture in beautiful high definition? Nope, not at all. What 2K was teasing couldn’t have strayed farther from my hopes and dreams:

BioShock is coming to iOS! pic.twitter.com/VDn0Gcici0

The first thing I thought about hearing this news is how porting BioShock to iOS will significantly diminish the game’s quality, in terms of both graphics and gameplay. One of the first things you will notice watching footage of the game is how much of the screen is taken up by the new HUD elements that aid in the new touch screen-based controls. If you don’t think the extra buttons take up too much space on the screen, then wait until you put your thumbs on it. Even if you took advantage of the game’s Bluetooth controller support the HUD would still be in the way. You won’t be able to properly marvel at Andrew Ryan’s magnificent underwater dystopia with all of that in your way. This is especially true if you buy the game for your iPhone, where you’re dealing with a screen that is significantly smaller than the iPad.

While many of the lines are still sharp, graphics also took a hit in the mobile port of BioShock. In order to reduce the amount of space it will take up on the devices, much of the lighting effects are removed, making the game significantly brighter. Die-hard fans like myself will tell you the game is meant to be dark-toned, and players should even go so far as to play it in a dark room to fully embrace the survival-horror elements of BioShock. I guarantee these lighting changes will make some of the game’s many Splicer jump-scares far less dramatic. 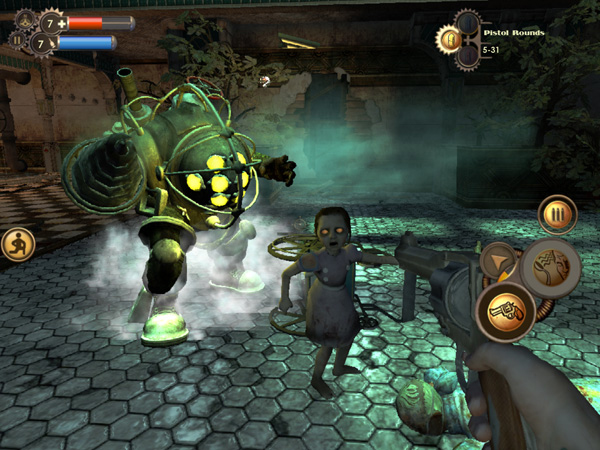 There may be a positive side to this 2007 classic getting an iOS port, however. If you’re able to bear with the annoying touch screen controls and lighting tweaks then there is an amazing game underneath. I am now speaking directly to those who may not have played the original BioShock yet: you will not find a better story in a first-person shooter. This game has some amazing writing, superior voice acting, and some of the best characters developed for a video game. Additionally, you get to envelop your senses in one of the most fantastic yet believable fictional worlds ever conceived: a once-beautiful underwater paradise, now quickly dilapidating after a long war. And you get to explore every nook and cranny of this mysterious place as you piece together just what happened to cause such a beautiful place to become a ruin. If you are one of those gamers who have not played BioShock before, I would recommend playing it on console or PC first, but hey, if mobile is your preferred platform then now you have a chance to play this amazing game on your platform of choice. While I may not be a fan of playing first-person shooters on iPad or iPhone, I’m happy knowing that people who do prefer those devices as gaming platforms now have the chance to play one of my favorite games.

And for those who have played BioShock on console or PC originally, it does sound tempting being able to carry one of the greatest video games of all time in your pocket. While combat may be difficult with those new controls, at least you get to revisit Rapture, and perhaps even catch some details you may not have noticed before with the help of the slightly brighter lighting.

And the best part is the full game is available after a one-time payment. If they seriously added microtransactions to the game, that sure would take BioShock’s application of Ayn Rand’s philosophy into the real world, now wouldn’t it?