Welcome to another installment of Channel Chaser! Seeing as there’s been a lot of buzz in recent years surrounding TV and movie expansions of the Marvel and DC Comics universes, I thought it was high time I talk about one such show: the CW’s latest comic book spinoff, Arrow. 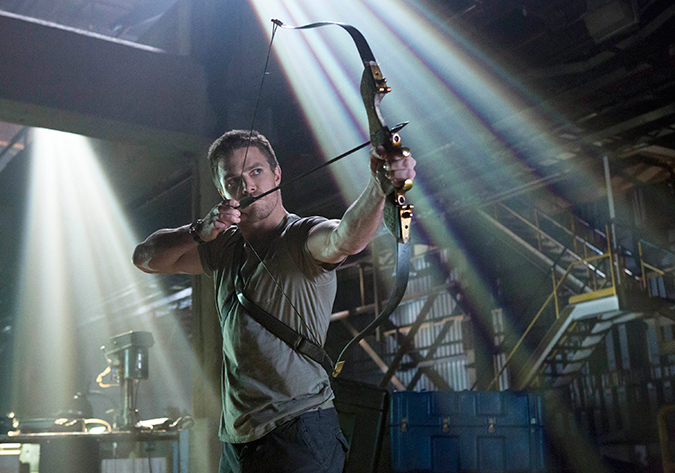 Arrow is the story of Oliver Queen, a wealthy playboy who returns to the city of his birth after being shipwrecked on an island for five years and struggling to survive. After being reunited with friends and family, he launches into a one-man quest to save Starling City from corruption, hunting down guilty parties from a list of names his father gave him.

While Oliver’s efforts are initially confined to getting vengeance on people who worked with his father in failing the city, he is eventually convinced to broaden his efforts and take on all crime in Starling, and is confronted by a series of ever more powerful opponents from the pages of DC Comics. These include Malcolm “Dark Archer” Merlyn, Slade “Deathstroke” Wilson, and Sebastian “Brother” Blood.

One thing I found particularly fascinating about the series is watching Oliver’s transition from a renegade vigilante into the hero he is known to be. I was especially shocked to see that throughout the first season, Oliver has absolutely no qualms about violence and frequently kills his targets, eliminating anyone who gets in his way whether they are innocent or not.

I felt this made the idea that the island had shaped Oliver Queen from a wimp into a walking weapon much more tangible, and avoided the typical superhero-story clichés of the heroes never actually killing their enemies. Similar shows like Smallville were incredibly cheesy due to the fact that, because Clark Kent was Superman and the ultimate “good guy”, he couldn’t actually be shown ending anyone’s life, and his enemies almost always met their ends due to some incredibly improbable accident of their own making.

I never thought I’d say it, but the use of flashbacks to Oliver’s time on the island was actually very well done. After watching Lost for almost six years, I kind of developed a bias against heavy use of recall shots, but that’s an issue for another article. It was especially interesting to be able to see in real time the disparities between what Oliver tells his friends and family about his experiences on the island and what it was actually like; namely, that he was not all alone and was instead embroiled in conflicts and plots on a global scale. Aside from the obviously stretched point that all these things just happened to conveniently take place on the same deserted island, the flashbacks are an integral part of understanding the motivations of the cast, and are rarely ever wasted.

Speaking of the cast, the characters of Arrow are in large part strong and believable ones, including the secondary lineup of villains like Deadshot, Firefly and Count Vertigo, even if some of them are killed off a bit too early for my taste. In particular I’d like to single out Stephen Amell for his performance as Oliver Queen; his portrayal of the brooding billionaire’s son who is haunted by his experiences and refusing to open up to people after years of betrayal and isolation is very compelling, as are his obviously conflicted motivations for doing what he does.

In addition, veteran actors Paul Blackthorne and John Barrowman excel as Detective Quentin Lance and Malcolm Merlyn, respectively. Blackthorne makes the traditionally boring stereotype of an honest cop struggling to get by in a city of corrupt officials fresh again thanks to his complicated relationship with Oliver and the Arrow, as well as his strong sense of family values and gruff, uncompromising exterior. Barrowman’s villainous streak is exciting to watch as well as he creates the character of a broken man who will stop at nothing to get what he sees as justice.

Since I’m a fan of comic book shout-outs, I’m also in love with how Arrow is creating its own version of the DC Comics universe, introducing elements like Ra’s al Ghul, the League of Assassins, S.T.A.R. Labs, and the Suicide Squad, just to name a few. The best part, though, was the introduction of Barry Allen in season two, who is later shown taking part in the accident that will turn him into the super-fast superhero The Flash. Apparently part of the CW’s long-term plan is to start up a Flash spin-off show that will frequently cross over with Arrow. All I have to say is, sign me up!

Arrow isn’t without its weaknesses, however; in terms of story, I feel like the transition from the gritty and realistic first season to the much more fantasy-inspired second season is a bit hard to swallow: it started with that weird earthquake machine and continued with the Mirakuru super-soldier serum. It feels like the show is just trying a little too hard to be as epic as the comics it came from sometimes. In the beginning of the show the pacing was a little slow as well, though it picks up around the middle of the first season.

My biggest beef is with the female characters of the show. While Sara Lance and Felicity Smoak are both worthy of attention, I feel that none of the other women really are, unfortunately. I’ll say it: Katie Cassidy is not a good actor. Laurel Lance is an inherently unlikable character for me, as are Thea and Moira Queen, although those two do look up slightly in the second season.

Overall, Arrow is a very solid addition to the lineup of comic book-inspired TV shows. Aside from some minor issues in casting and pacing, I was on the edge of my seat almost the entire time watching it. Here’s to hoping the CW continues to nail the bulls-eye with their future forays into the DC universe!