Full disclosure: I am terrible at watching scary movies. Gore/horror + my overactive imagination = a bad combination on par with tequila shots + karaoke bars. Scary movies bother me for days after I watch them, and I become a jittery, skittish mess, looking over my shoulder at every turn. Ironically, most of my favorite TV shows are of the sci-fi or fantasy persuasion, which means they tend to feature a healthy dose of blood, death, and monsters on a weekly basis. So if you’re looking for something to creep you out for Halloween, you’ve come to the right place. In no particular order, I give you: 5 Creepy Episodes of TV to Watch This Halloween.

1. “Hush”, from Buffy the Vampire Slayer 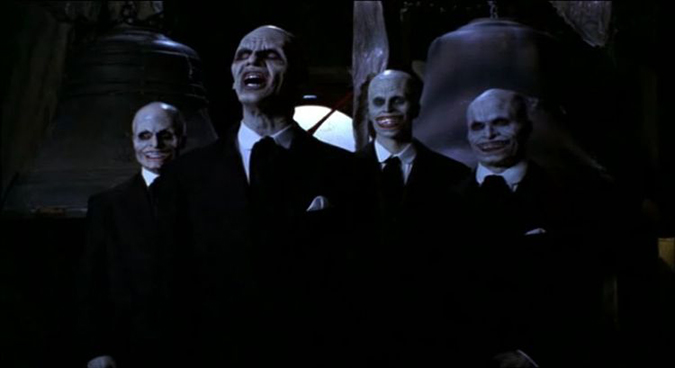 I watched Hush for the first time alone in my college dorm room at 12:30 in the morning. My roommate, who had started her Buffy marathon just a week before my own foray into the fandom, had warned me about this episode, but I was in full on binge-watching mode. We had collectively rented out most of the DVDs from the library (alas, for Netflix Instant would not become a part of my vocabulary for about another year), so nothing was stopping me from pulling yet another Buffy all-nighter. And I pulled an all-nighter that night, but it was mostly because I was too scared to sleep.

“Hush” is about a group of gliding, ghoulish, grinning, fairy tale monsters called The Gentlemen, who steal people’s voices so no one can hear them scream as they cut out their hearts. There’s even a really creepy song about it, sung by an equally creepy little girl during a dream sequence. (Can’t call to mom / Can’t say a word / You’re gonna die screaming but you won’t be heard.)

But beyond the horrifying appearance and motive of the sinister Gentlemen, what really makes the episode scary is that almost the entire hour of television is void of any dialogue. The lack of any spoken words from the characters would seem like a shtick in many other contexts, but in Buffy it is addressed as the terrifying oddity that it is. As a viewer, you begin to realize just how important spoken communication is, and the terror felt by the citizens of Sunnydale as the Gentlemen and their creepy straitjacketed minions roam the streets in search of human hearts begins to settle into your own.

2. “And Then There was Shawn”, from Boy Meets World 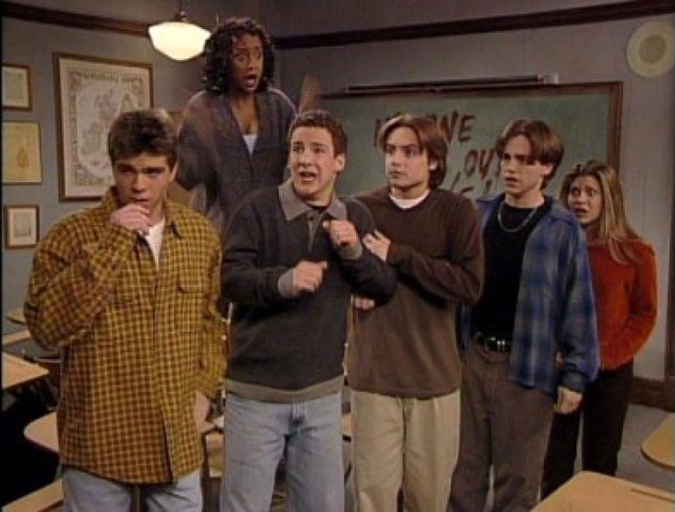 Yeah, okay, so this isn’t actually one of the scariest episodes of television ever. In fact, it’s kind of hilarious. But remember watching it as a kid? (Or am I seriously dating myself here?) Yeah, that episode freaked me out. The BMW gang find themselves in detention one evening, and discover that a serial killer is picking them off, one by one! (DUN DUN DUUUUNNNNN) Although I can watch it now with a smile on my face, and see it for the satire it really is, it doesn’t lessen the fact that this episode is a real classic. 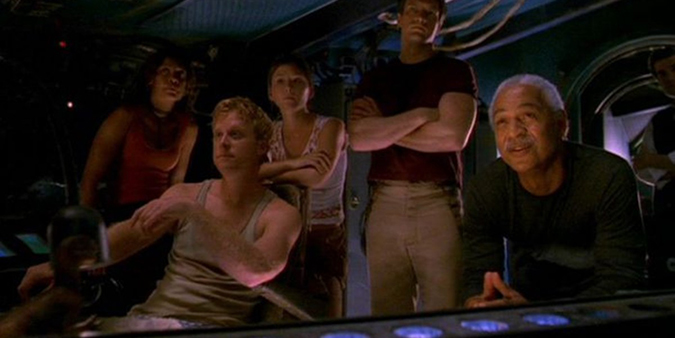 The crew of Serenity come across a ghostly ship that appears to be abandoned. Upon closer inspection, they discover that the crew and passengers have been attacked by Reavers, the savage cannibals who were once men. Apart from the mutilated bodies of the passengers hanging from the ceiling and the descent of the lone survivor into his own tortured madness, we see, in this episode, that even strong, tough guy Jayne is terrified of the Reavers, which, if you haven’t been paying attention, means they must be pretty scary. We also see, through the eyes of Simon Tam as he clings to the outer hull of Serenity, the absolute and endless vastness of space, which would be enough to drive anyone insane. That subtle little addition might be more terrifying, psychologically at least, than the violence and mutilation we see in the rest of the episode. “Bushwhacked” is one of those episodes that, no matter how long it’s been since I’ve watched Firefly, will always stick in my mind as creepy. 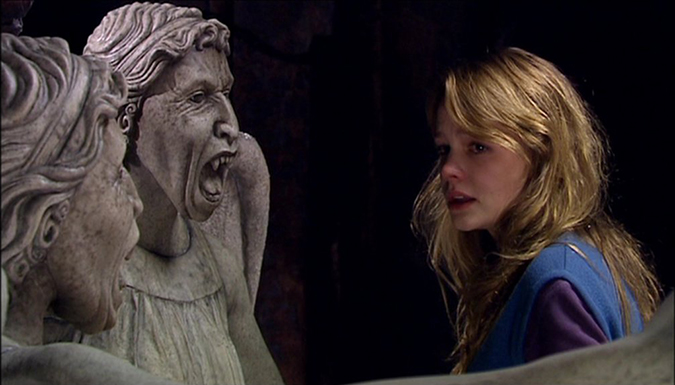 “Don’t turn your back. Don’t look away. And don’t blink.”

Although it’s technically just a “filler” episode, filmed on a low budget and without the two main characters, The Doctor and Martha, present for most of the plot, “Blink” has gone down in history as probably the single scariest episode ever aired during Doctor Who‘s five long decades.The episode introduced the Weeping Angels, statuesque creatures that can only move when no one is watching them. Arguably the worst part? If they get close, if you take your eyes off of them just long enough, the touch of a Weeping Angel will, in the words of The Doctor, “just zap you into the past and let you live to death. The rest of your life used up and blown away in the blink of an eye. You die in the past, and in the present they consume the energy of all the days you might have had, all your stolen moments.” Crazy stuff, right?

Now add to these monsters, these so-called “Lonely Assassins”, the fact that The Doctor and Martha are stuck in 1969, and that it’s up to a young woman and her friend to save not only The Doctor, but themselves as well, and a plotline that’s about as “wibbly-wobbly” as “timey-wimey” itself, and the puzzle you’re in for makes for more than a thrill ride than most full-length movies. If you haven’t ever seen “Blink,” you just need to. It’s that simple. 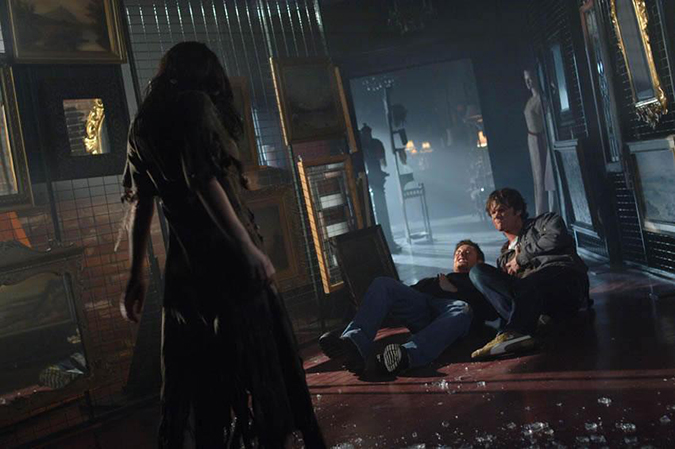 Let’s be real here. Season 1 of Supernatural was undoubtedly the scariest. Before it settled into the tangled nest of angels and demons and fangirl fights between Sam/Dean and Dean/Cas shippers that it is now, Supernatural was a horror show, really. Every week it featured a new case, a new monster, and a new mystery to solve. Sounds pretty standard, right? There are plenty of those out there. Except the early episodes of Supernatural were actually sometimes pretty terrifying. From the scarecrow made of the skin of its victims, to a vengeful spirit in a lake that attacked people in the bathtub, a lot of those episodes were downright creepy. But one of the first episodes in the entire series, “Bloody Mary”, brought credence to a myth told at slumber parties throughout my entire childhood.

About the infamous young woman who kills you if you say her name three times in front of a mirror, the episode featured a lot of visual horror — sudden shots of a dark figure in the background of a mirror, and victims bleeding from the eyeballs before they die. Ugh.

I’d write more about the episode, but there’s a full length mirror in front of me in this room, and I’ve already typed her name twice…

Need something to binge-watch in between serving trick-or-treaters tonight? Try The Walking Dead or American Horror Story, two shows I’ve never personally watched because of my debilitating fear of a.) American horror stories and b.) the walking dead. But really. Zombies are legitimately terrifying to me. But if that’s your thing, then you go right ahead. Have fun. Happy Halloween, all.

Death by DVR is written by Emily Krempholtz.