Mr. Shark reviews Yowapeda and does quite a lot of singing.

It is hard to believe that six months have already passed since fans of the YouTube let’s play/comedy channel “Game Grumps” were dealt a hard blow. If you haven’t been following this popular gaming channel, let me get you up to speed: in June one of the founding members of Game Grumps, gaming personality Jon “JonTron” Jafari, suddenly left the channel with little explanation as to why. The channel’s other founder, popular animator Arin “Egoraptor” Hanson, swiftly replaced Jon with a new talent, Danny “Sexbang” Avidan, lead singer of the comedy band Ninja Sex Party. Fans were furious, suggesting a personal falling-out between the two YouTube gaming stars. Yet the events were quickly swept under the rug as the Game Grumps continued to push out their usual three gaming videos a day.

Why am I bringing this old news back out from under the rug? This weekend the Game Grumps were under the same roof as JonTron at this year’s Music and Gaming Festival in National Harbor, Maryland, for the first time since Jon left the Game Grumps channel. Going into this weekend, I was expecting some very difficult questions from fans at the panels regarding Jon’s departure from the show.

But surprisingly, all of the Game Grumps-related panels were remarkably tame. And that’s fantastic.

It’s safe to say that the Internet can be pretty cruel sometimes, especially when fans of a beloved show like Game Grumps take their criticism to the extreme. Yet at MAGFest we didn’t see fans barking tough questions at Arin, Danny or Jon. We saw a complete reversal of what you’d expect from your typical angry Internet mob. Case in point: in the days immediately following Jon leaving Game Grumps, fans refused to accept that Danny could ever be a suitable replacement for Jon. But at the Game Grumps panel, Danny was treated with an incredible amount of respect. Fans tossed him massive bags of Skittles (the candy he munches on during Game Grumps recording sessions), and he even gave a few hugs and sang some songs for the packed house. The JonTron panel apparently was very much the same; a Reddit thread of JonTron fans that presumably included MAGFest attendees said Jon confirmed at his panel that he will not return to Game Grumps in any capacity, but that was all he said on the matter. 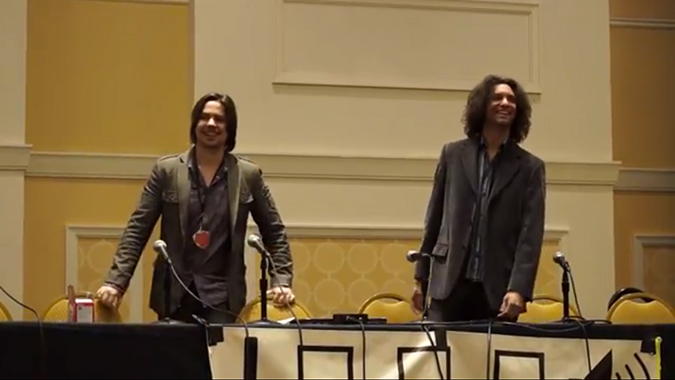 I’m sure I’m not the only fan of the Game Grumps who is still curious to know the full story about Jon leaving the channel. I definitely don’t think this story is done being told; after browsing several social media platforms, I could not find a single picture of Arin and Jon together at MAGFest, which suggests the two have severed all ties.

But that’s another story for another time. For now, we need to applaud Game Grumps fans for doing something that many fan groups are unable to do: distinguishing the personal and professional lives of these gaming personalities, and actually respecting the difference between the two. It is clear by now that the details of Jon leaving Game Grumps were not meant for the public ear. Fans respected that wish by not bringing up the subject at any panels involving Arin and Jon. 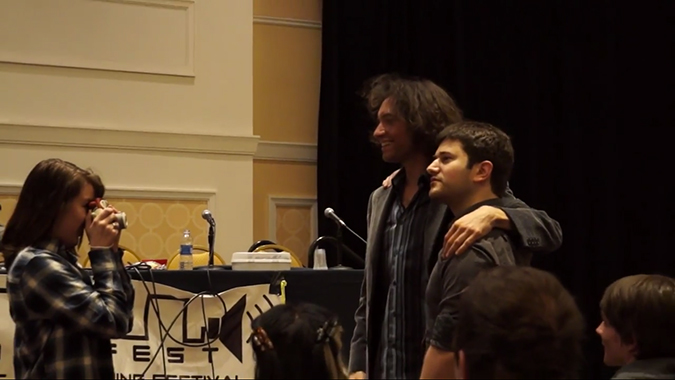 But even more than that, fans of Game Grumps continued to respect the professional lives of all “Grumps,” past and present. Even though the change in hosts (and the addition of a new series, “Steam Train,” to the channel on the same day) was difficult to grasp at first, most Game Grumps viewers gave the new personalities a shot. They watched Danny and eventually accepted him as the new Jon. This weekend’s Game Grumps panel is proof that Danny has been fully accepted into the Game Grumps family, in-jokes and all. And the rest of the channel’s ensemble (including editor Barry Kramer, Arin’s wife Suzy, and animator Ross O’Donovan) gained an equal amount of respect for the hard work and dedication they have put into the Game Grumps channel in the six months since these changes were made.

Arin proved to be a clever guy, officially calling Game Grumps fans “Lovelies.” They really do live up to the name.

Hi there, folks.  As you may have noticed, it’s a new year, full of hope and yet-unbroken resolutions.  As we head into this first part of 2014, there will be a few things changing on the site, along with many things staying the same.  We’re looking forward to bringing you all kinds of new and exciting content this year, and we hope you’ll enjoy what we’ve got in store.

The Minus World will still run every Tuesday, bringing you plenty of video game humor and industry analysis.

Kawaii Overthink will still run every Wednesday, and will still mix clever musings on anime and manga with silly photo captions.

Shark vs Anime will be back this week, and will continue to run every Wednesday.

Shark Puppet Pub will still run every other Friday, just as soon as we get it started back up again.

Things That Are Changing

Pit Box One will run on an irregular schedule until the world of motor racing comes back from the big winter break.  The column will now focus almost exclusively on actual racing, with only occasional coverage of driving video games.

We’ve got a new video series in the works.  It’ll focus on video games, it’ll be funny, and it’ll involve a puppet. More details to come over the next few weeks.

We also have some mysterious, secretive long-term projects that we’re planning to do this year.  We can’t tell you anything else right now, but we promise we’re up to something.

That’s all for now.  We’re excited, and we hope you are too!

After an onslaught of man-eating titans and terminally unpopular high school heroines, another year of anime is officially in the rearview mirror.  As we all huddle indoors and wait for the first Big Thing of 2014 to appear, I’ve decided to jump on the bandwagon of year-end award columns.  After all, it’s a natural part of the otaku lifestyle to bicker endlessly about whose favorite show is the best.  Let’s get right into it and hand out some imaginary trophies! 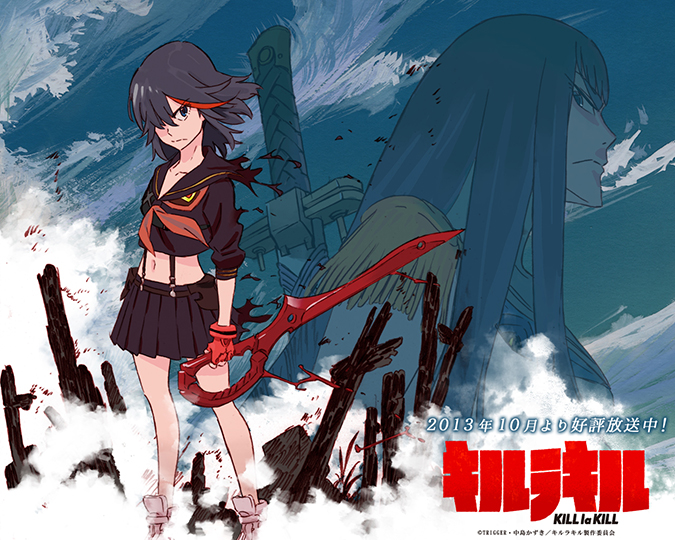 Runner Up: Attack on Titan

2013 was apparently the year of big epic action shows, as the impressive battle sequences in Kill la Kill and Attack on Titan seemed to have everyone talking.  My pick ultimately goes to Kill la Kill by virtue of its clever jabs at its own genre.  It also managed to give us a sense of grudging respect for many of the villains, a rare feat when the easy option is to just make the bad guys a collection of despicable jerks.  Attack on Titan excelled at conveying the terror of fighting giant, hungry monsters, but didn’t put much effort into breaking out of the action series formula. 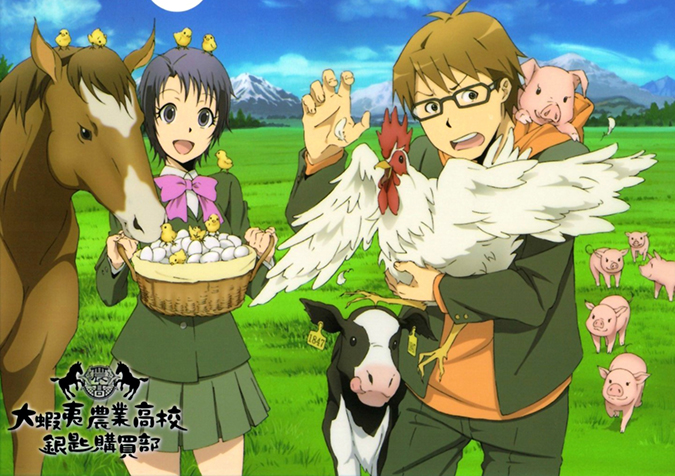 If 2013 was a year where loud action shows grabbed most of the attention, a quiet slice of life series like Silver Spoon never stood much of a chance.  Anyone who gave it a shot, however, was treated to an honest and well-researched account of modern farm life, along with a surprisingly intelligent look at our relationship with our food.  Meanwhile, Space Brothers deserves similar credit for continuing to make us care deeply about its cast of astronauts, whether they’re facing a major crisis or the mundane difficulties of everyday life. 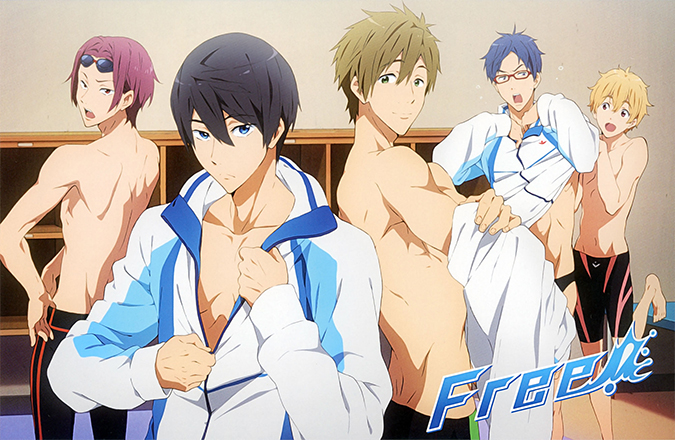 There was never any doubt that Free! would be a major success amongst people who like watching handsome guys parade around in tight swimwear.  What I never saw coming was the genuine quality of the show itself.  The highs and lows of the Iwatobi Swim Club made for an entertaining season of episodes, and Free! successfully proved that a fanservice show doesn’t have to be shamelessly sleazy in order to get ahead.  RWBY broke a different stereotype by showing us that a small production team from outside of Japan can put together a solid anime series, and I commend the folks at Rooster Teeth for their work on it.

Most Comedic Comedy: The Devil is a Part-Timer! 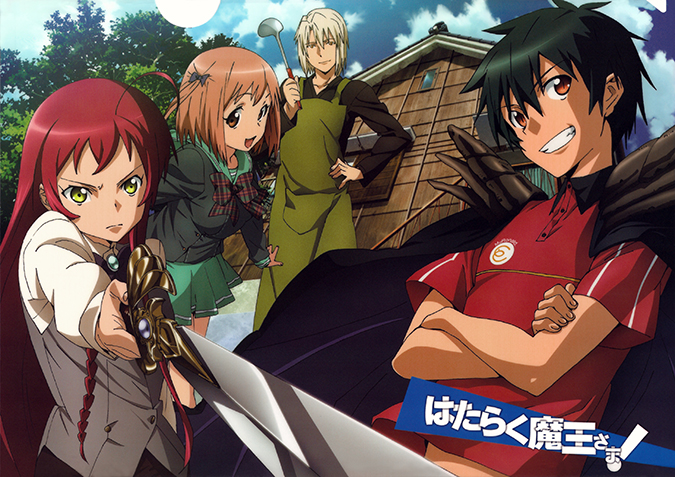 When you take the cast of a typical fantasy series and have them work minimum-wage jobs in modern-day Japan, it’s hard not to make an amusing comedy.  The writers of The Devil is a Part-Timer! took that premise and turned into far more than an amusing comedy: they made a great one.  With a well-developed cast of endearing characters and an excellent sense of parody, Devil works amazingly well on multiple levels.  In another year, the clever otaku comedy of Outbreak Company might have been enough to sweep this category, as its only mistake was coming out in the same year as one of my all-time favorites. 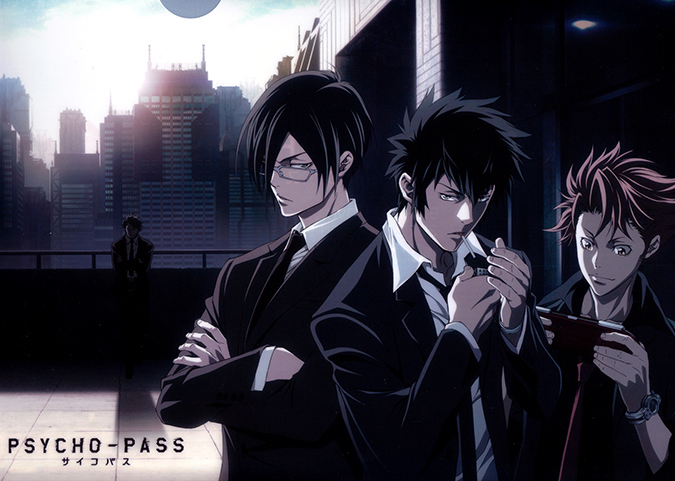 Runner Up: Gargantia on the Verdurous Planet

While its first half ran at the end of 2012, I’m still counting Psycho-Pass for this year’s awards.  A sci-fi police procedural following in the footsteps of classics like Ghost In The Shell, Psycho-Pass mixes insightful social commentary with the genuine impression that things could go horribly wrong for its heroes at any moment.  Being guided by the twisted mind behind Madoka Magica and Fate Zero certainly helps that sense of impending disaster.  Gargantia wasn’t quite as engaging, but still managed to make us sweat when it threatened to destroy its little post-apocalyptic slice of paradise. 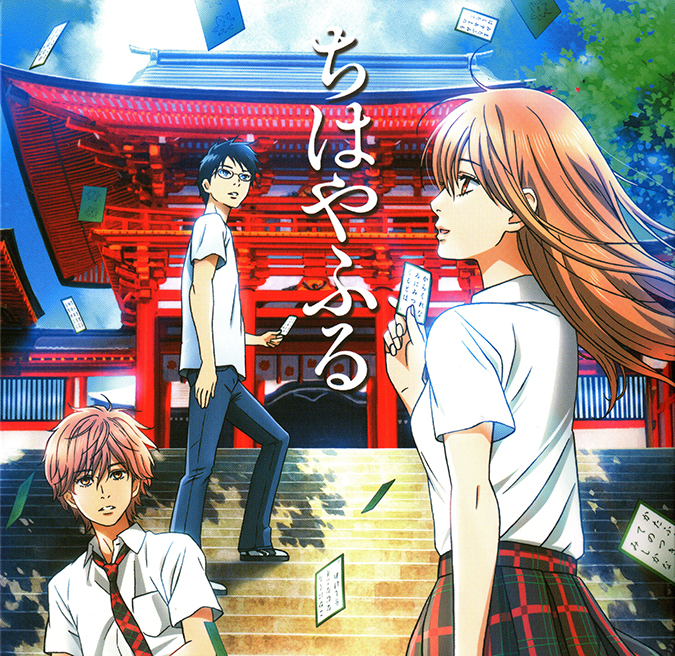 There was a time not long ago when I might have scoffed at the prospect of watching sports anime, laughing haughtily as I looked down my nose at the constant use of tournament structure for a plotline.  Things have changed in recent years, thanks in no small part to absurdly compelling cast of Chihayafuru.  Even with my high expectations from the first season, the second installment managed to have me shouting at the screen as fictional people played a game about memorizing verses of poetry.  If there isn’t a third season in 2014, I shall be incredibly sad.  At least I’ll have Yowapeda, which has managed to make bicycle racing fun without even having to use Queen’s classic song.  Biiiiicycle… 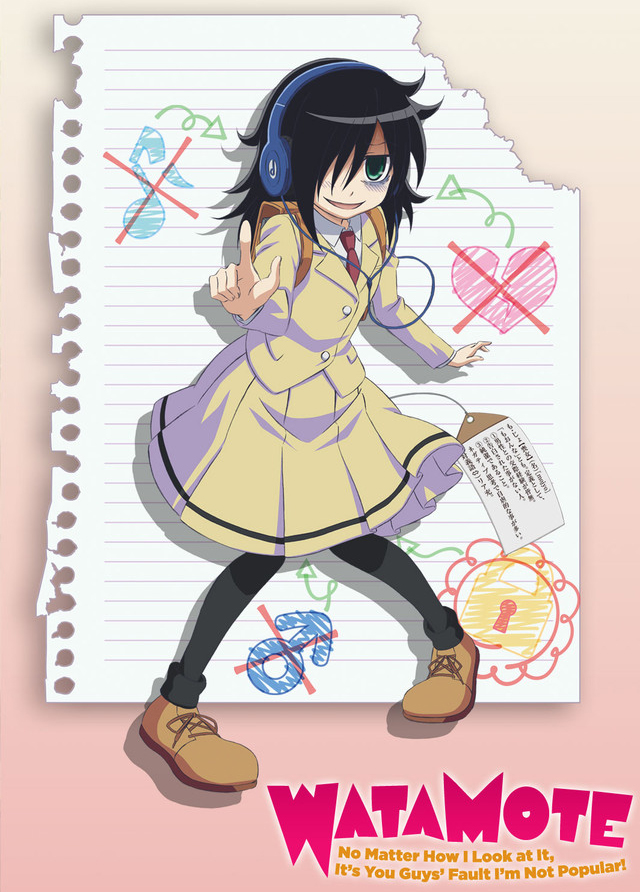 Seriously, anime producers, stop with the paragraph-long titles already.  It’s no longer novel or amusing.  Still, No Matter How You Look At It, It’s You Guys’ Fault I’m Not Popular! was an excellent piece of comedy, giving viewers the chance to laugh at the geeky social failings we’ve all gone through at one point or another.  SNAFU makes the list for having enough confidence in its misanthropic protagonists that it didn’t feel the need to bombard us with gimmicks or fanservice.  And you know what?  It was all the better for doing so. 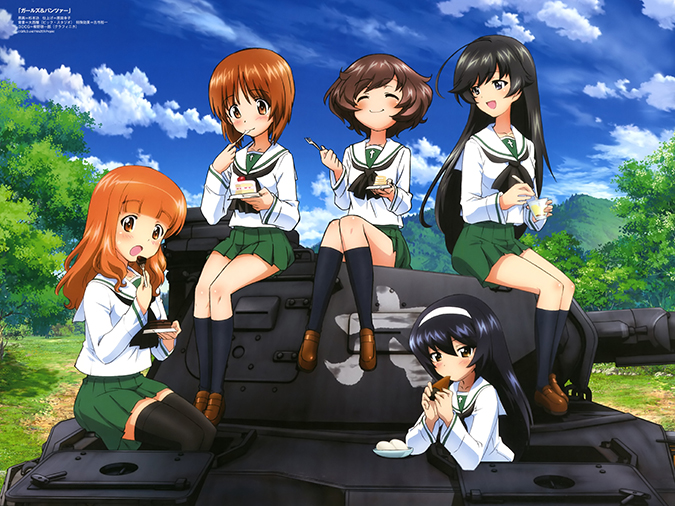 Runner Up: Dusk Maiden of Amnesia

No one likes to talk about it, but we’ve all got a backlog of shows that we missed the first time around.  I wrote off Girls und Panzer in 2012 because of its insane girls-with-tanks premise, but it’s a charming show that was clearly crafted with love by its creative staff.  It’s absolutely worth a try, and Sentai Filmworks has recently been savvy enough to release the entire series on Blu-Ray.  The same goes for Dusk Maiden of Amnesia, which made me laugh, cry, and look warily over my shoulder at night.

That’s all I’ve got for 2013, folks.  It was a pretty impressive year for anime, and I had a difficult time narrowing down nearly every single category.  Hopefully next year will bring us more exciting new shows to get into forum arguments over.  Who knows?  Maybe I’ll even (finally) get around to covering the occasional manga-related topic this year.  Happy 2014!

Kawaii Overthink is written by Paul Jensen. You can follow his ramblings about anime on Twitter.
Newer Entries